Orbitz.com
eDreams
Expedia.comUS$199
View all 16 deals
Prices are the average nightly price provided by our partners and may not include all taxes and fees. Taxes and fees that are shown are estimates only. Please see our partners for more details.
jenimilsom
Bristol, United Kingdom
82

Review of The Westleton Crown
Reviewed November 3, 2020 via mobile

What a wonderful place and the first time back to this part of the country in 15 years. The staff without exception are kind, helpful and nothing is too much trouble. So sad that they will have to close tomorrow but hopeful they can recover for a buzzing and profitable Christmas. Thanks for a lovely stay and wish you all the very best. Will return! More

Good Afternoon Jenimilsom,
Thank you for your lovely words, we are thrilled after being away for 15 years you have come back to the Westleton Crown. We have now reopened and are busy preparing for Christmas, we look forward to seeing you again very soon,

Report response as inappropriateThank you. We appreciate your input.
This response is the subjective opinion of the management representative and not of TripAdvisor LLC
See all 1,100 reviews
Nearby Hotels 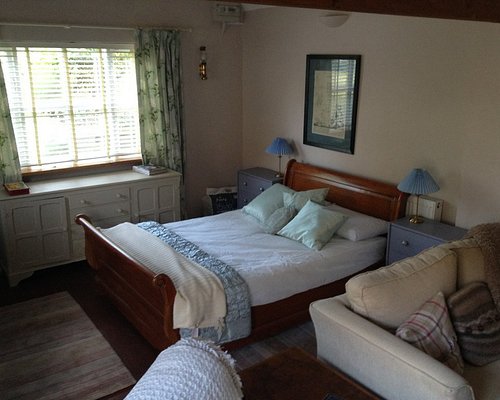 We have stayed twice recently at the Westleton Crown located between Southwold, Dunwich and Aldborough. It is a great location for a few days by the coast. Dog friendly. Great food and service, relaxed atmosphere, nice bar. The staff are friendly and helpful (thanks particularly to Rosie for your cheerful help).
A delightful stay and a hotel we highly recommend.

Good Afternoon Janegoodyer,
Great to hear you had a delightful stay and you are correct, Rosie is a wonderful team member! We look forward to seeing you again for wonderful food, great service and long walks along the beach.

Report response as inappropriateThank you. We appreciate your input.
This response is the subjective opinion of the management representative and not of TripAdvisor LLC
642mich
Essex, United Kingdom
51
Reviewed November 1, 2020
Over priced and sub standard

Stayed for the night last night. Went based on excellent food reviews. Arrived and left to find our room which was very small but clean. On arrival told only two slots left for breakfast, either 8.15 or 10am. Was told dinner was at 6.30 for us. Questioned this as we realised we had prebooked it for 7.30. This wasnt a problem. Towels left on the bed as nowhere to hang them in the bathroom. Nowhere to put toiletries either. No toiletries whatsoever in room. Had to ask at reception for shower gel.

Went to dinner. Ordered calamari, well i have never encountered such a mean portion of calamari. Must have been about 4 extremely thin slices deep fried with about 4 small pieces of chorizo but lots of salad leaves. No substance to the starter. Partner had a nice starter though. Had steak for main which was cooked perfectly but beef dripping chips were rustic and taste wasnt to my liking, but that could be me! Salad leaves with few slices of shallots accompanied this. Partner had pork chop which was as tough as old boots. I had a dessert of rice pudding that was awful. No sweetness at all and quite an unpleasant accompanying flavour. Partner had a solid slice of polenta cake.

When waitress asked if everything was ok we mentioned the pork chop. She apologised and said would take this off the bill (at £18.50).

Breakfast. Service slow. A backlog waiting to be cooked and go out apparently. Had toast whilst waiting and served on a plate with butter. Turned the slices over which were as burnt as could be, black and charred. Cooked breakfast was good. Waitress noticed the black toasts and took away whist laughing. Another plate of toast arrived at their behest, perfectly cooked but no apology made.

Checked out and paid. Pork chop not taken off the bill but cheaper £7 dessert was.

Sorry but we cannot recommend this hotel and will not be going back.

I am sorry the experience was not up to the standard you expected after reading the excellent food reviews. I will be contacting you to resolve this situation, thank you

Report response as inappropriateThank you. We appreciate your input.
This response is the subjective opinion of the management representative and not of TripAdvisor LLC
cromarty53
2946
Reviewed October 30, 2020
Welcome relaxing stay

We spent a night here this week ( Wed) after a rather stressful few days elsewhere. A warm and friendly member of staff checked us into Skylark, and we were so happy with our snug, warm and comfortable room.
All staff were really helpful, polite and offered too service. Gaby who served us on Wednesday night and who we saw again at breakfast was superb. Nothing was too much for her and she was an absolute natural at making us feel relaxed and looked after without any hassling. I was rather stressed on arrival and by the time I left was a different person. Our dogs were really relaxed and slept very well. When I had to take them down for a last toilet stop at 1130pm there was a lovely male member of staff laying up for breakfast who was so kind and helpful he really needs a mention.
Totally recommend for relaxing, food was delicious and the whole package was brilliant. I didnt want to leave and will be back again.
Thank you

Thank you very much for a lovely review it certainly sounds like you were relaxed and recharged when you left us, which is great. Gabby and our night team of Andy/Richard are fantastic team members who enjoy engaging with guests and delivering an experience whereby guests want to come back again and again. We have many dogs visit us every week and it is part of the Chestnut culture to look after our furry friends as we do our human friends, so we look forward to welcoming you all back again very soon,

Report response as inappropriateThank you. We appreciate your input.
This response is the subjective opinion of the management representative and not of TripAdvisor LLC
philippajc
Lichfield, United Kingdom
185
Reviewed October 30, 2020 via mobile
Close to good

We came to stay for 2 nights as part of a mini moon. Firstly the pub/restaurant and food served is wonderful - I would highly recommend it. The pub is also very dog friendly and the staff are lovely. Unfortunately the overnight stay did not meet our expectations hence the 3 star rating.
We were put in a room in the main restaurant building which was noisy and the rooms here had not been recently renovated as the pictures suggest. We spent the first 10 min fixing the blinds. The road noise was very noticeable, the bathroom was quite run down and the large green fire exit light kept us awake during the night. We were also asked to wait until 4pm whilst changing rooms during our stay in which time we were not offered drinks or apologies.
For those considering a stay - ask for a room in the newly renovated out buildings!

Thankyou for your feedback regarding your stay in October. I apologise for the areas you have highlighted as being a concern, we run a continual maintenance programme which is in place to ensure all areas of the Westleton Crown are looking as sharp as our guests expect and I am sorry on this occasion we fell short. The feedback you have given is a vital way for us to improve and continually evolve our product to ensure we are exceeding our guests expectation, rest assured this will be passed onto the relevant teams and remedial action followed up.

Report response as inappropriateThank you. We appreciate your input.
This response is the subjective opinion of the management representative and not of TripAdvisor LLC
LondonPlod
London
94
Reviewed October 26, 2020
Great food.

We recently spent four nights at the Crown. The food was exceptionally good, and everything is cooked fresh so there was a little wait sometimes. They coped well with the COVID situation and were all very friendly. Our only disappointment was the room. Although it was nicely presented it was exceedingly small and dark. We needed a light on all the time we were in it. There was only one bedside lamp as we were told one of them was broken and they did not have a replacement. We found our towels on the bed and realised they were only there as there was nowhere to put them in the bathroom. We had to put them on the floor in the end. The light in the wardrobe was broken and there was no bulb in it. At night it was uncomfortably warm as we were unable to control the heating. The thermometer was showing it was 25 degrees. At one point we had to get out of bed and open the outer door for 20 minutes so the room would cool down. We spent over £700 for our stay and they still thought that it was reasonable to charge us a 10% service charge that we felt was a bit of a rip off. I would recommend the food but not the accommodation. For us the place was a little too pricy for what it was.

Thank you for your feedback regarding your recent stay. I am sorry you encountered some concerns with the lighting and heat in your room, however delighted to hear you felt the food was exceptional and our team all very friendly. If you could contact me directly on email I would like to follow up with you, thank you