Eden Paradise Spa Ecolodge
Book now! This hotel is likely to sell out soon.
Lock in the lowest price from these sites

US$183
View deal
Expedia.com
Hotels.com
eDreams
View all 9 deals
Prices are the average nightly price provided by our partners and may not include all taxes and fees. Taxes and fees that are shown are estimates only. Please see our partners for more details.
ClaudiaMunich2009
Munich, Germany
4072

We stayed for our last night in Martinique at Eden Paradise Spa Ecolodge. The receptionists at check-in and check-out were very friendly and at arrival we got a welcome juice with some fruits. The small pool area and the tropicals plants around were pleasant to look at. From the veranda at the main house - where you can eat your breakfast/dinner - you can watch humming birds. Unfortunately I did not feel comfortable in our bungalow at all. The jacuzzi was in the middle of the room and I was afraid to fall into it by accident. Above the jacuzzi were dangling two lamps - connected to electricity ! This really scared me. The shower was a cupboard in the room and the toilet as well. Overall it felt like a very basic bungalow on a camping site. The bungalow was supposed to have ocean view. What you saw from the very tiny balcony/porch was a brown fence and green plants. We payed over 300 Euros for the night and for this basic accommodation even half the price would be too much.
P.S.:
I can not recommend our Deluxe Bungalow Celeste with Ocean View. It has no ocean view, it is not deluxe and the Jacuzzi seems like a waterhole trap in the middle of the room.More 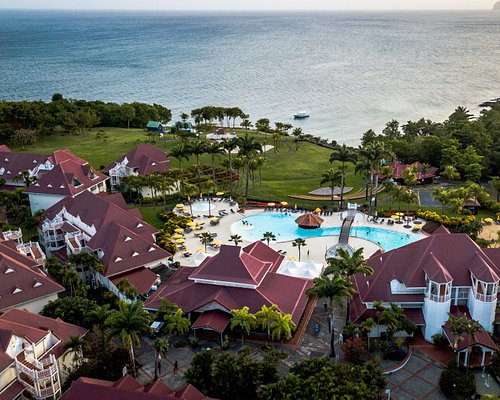 Priceline
View deal
FindHotel
US$130
Agoda.com
US$133
Expedia.com
View all 12 deals from US$130
191 reviews
4.1 km from Eden Paradise Spa Ecolodge
We compared the lowest prices from 12 websites 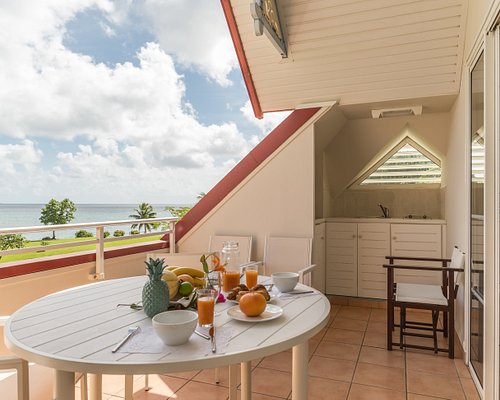 Hotels.com
View deal
Pay up to 12X
FindHotel
US$128
Expedia.com
Travelocity
View all 8 deals from US$128
22 reviews
3.9 km from Eden Paradise Spa Ecolodge
We compared the lowest prices from 8 websites
Residence Aux Vents

We arrived around 15-16h and checked in, when installed in the room we got the news that they had no fresh water due to low water in the area (something we were not aware of). We made the bad choice to stay since they told us water would come back. After 22 we managed to get water to the sink but not shower. On sunday morning there was finally water to the shower, but cold! Of course this affected our stay. After a massage with oil (including the head) and then not being able to shower and schampoo is just not okay. When running a spahotel they need to have their own waterreserve otherwise they should have told us this before we booked or at least before showing up at the hotel and give us the possibility to refund or rebook. When I emailed them after to complain (since the crew working at the hotel could not do anything for us) I got a very disappointing answer first claiming we’ve rebooked several times (not true, it happened once and several weeks before the date, we thereafter tried to book several times but it was never available) and then just blaming the city for the inconvenice and taking no responsibility at all. The owner of Eden Paradise Spa Ecolodge don’t know what service is and they can keep on blaming it on other circumstances (as I’ve seen now on other comments on tripadvisor) but it will be their downfall.

This review is the subjective opinion of a TripAdvisor member and not of TripAdvisor LLC
Timfromnorwich
Norwich, United Kingdom
133
Reviewed February 13, 2018
Loved every second!

My fiance and I stayed 2 nights here recently, and my only regret was not being able to spend longer. It's somewhere that we're going to go back time and time again , and that's not the sort of thing we usually do.
It's just a wicked little spot, so beautiful and relaxing and chilled out. Exactly what we needed! I wish I could speak better French to thank them so much for everything they did for us!
Stay here!

Dear Tim,
Thank you for sharing your memorable impressions of your stay. We are delighted that you have been able to find the peace and quiet sought in our establishment. The whole team thanks you and it is with great pleasure that we will welcome you again among us.
Sincerely yours,
The Manager.
Lisiane

Report response as inappropriateThank you. We appreciate your input.
This response is the subjective opinion of the management representative and not of TripAdvisor LLC
grandemela80
Rome, Italy
7193
Reviewed December 28, 2015 via mobile
I won't come back

For The amount you pay (280 euro per night) It is not a paradise at all, It's closer to an hostel. When we arrived noone helped us with luggages. In The room there were not bottles of water. In The fridge there was something left from The previous guests. In The bathroom we found only a dispenser with watery soap - diluited with water- (no shampoo, no bath soap). When we turned o
n The hair drier an animal came out . The price do not worth The staying.