US$287
US$206
View deal
Orbitz.com
Expedia.comUS$287
eDreams
View all 14 deals
Prices are the average nightly price provided by our partners and may not include all taxes and fees. Taxes and fees that are shown are estimates only. Please see our partners for more details.
Ruth B
Iowa City, Iowa
102

Vida Homes is a beautiful, quiet, friendly resort with quite possibly the most amazing staff that we have ever encountered in our travels. The condos themselves are lovely and located on the beach with a swimming pool just steps away. But it is the five star staff that makes Vida Homes the exceptional place that it is. From the housekeeping to the grounds crew to security to reception to the retaurant and bar staff, each and every person is friendly, kind, efficient, and makes sure you know they are there to make your stay wonderful. No matter how beautiful a resort might be, a staff like the one at Vida Homes elevates it to the next level of luxury and comfort.More

Show less
Room tip: We are in and out all day so prefer the first floor rooms.

We are sincerely glad and thankful for your wonderful review on our staff and for always choosing Vida Homes as your holiday destination for a month. Your personal feedback is definitely an encouragement to our entire team. We provide sincere and genuine care to all our guests and your feedback affirms our effort. Thank you for the affirmation. Looking forward to welcoming you again! (",)

Report response as inappropriateThank you. We appreciate your input.
This response is the subjective opinion of the management representative and not of TripAdvisor LLC
See all 80 reviews
Nearby Hotels 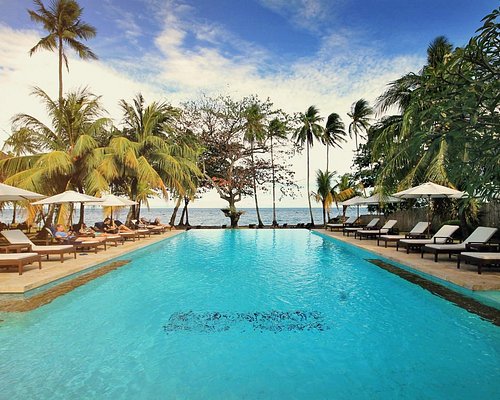 Hotels.com
View deal
Travelocity
ZenHotels.com
US$48
Expedia.com
US$58
View all 11 deals from US$48
393 reviews
2.6 km from Vida Homes Condo Resort
We compared the lowest prices from 11 websites 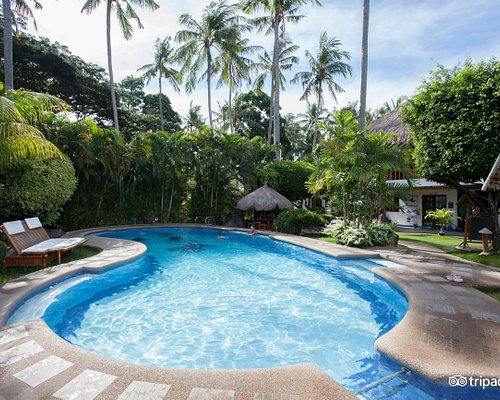 Hotels.com
View deal
Travelocity
FindHotel
US$94
Expedia.com
US$123
View all 15 deals from US$94
369 reviews
0.1 km from Vida Homes Condo Resort

I just returned home to the US after the fourth monthly visit to Vida Homes Condo Resort, each trip has been super! Management and staff are professional and always ready to assist with information on travel, local excursions.

My condo, pool view, is ideal. Design is warm and welcoming, with two full baths in case of a guest. Well appointed kitchen with plenty of utensils if the chef likes to whip up a meal. Housekeeping staff does a very good job!

I like to work out and Vida Fit gym is top shelf, with all the equipment for a full work out with weights, cardio, and aerobic room to do active exercise. Also enjoy swimming in the lap pool. Reception staff is available 24/7 and helped me out with everything from telephone loading with Globe, to transfers to the airport.

For divers: only a few minutes walk to the dive center and area to board the boats. Nice to have that convenience. Location is good to take a walk from the resort into Dauin to see the town, market, and local area. Also, close to several motorcycle/scooter rentals, I rent a Honda 125cc for a month, very handy for trips into Dumaguete and beyond, like Valencia.

We are delighted to know that you enjoyed your stay every time you are here. :) Thank you for sharing your detailed feedback about the property, service and staff. Thank you for being kind and thoughtful. We hope to have you again this September :) Hugs from your Vida Homes family!

Report response as inappropriateThank you. We appreciate your input.
This response is the subjective opinion of the management representative and not of TripAdvisor LLC
8484cjdb
Makati, Philippines
21
Reviewed March 2, 2020
7th anniversary in homy luxury

We stayed between 2/22 - 2/24. The welcome was superb which included being able to check in at 7:30 am! Such great convenience.

The room/apartment was so spacious, and the veranda/terrace beautiful. Very clean and complete with all necessities.The bathroom was huge!

The place also offered a quiet luxury, one that fills your need to de-stress while making sure you both have convenience and serenity. All Vida Homes personnel are very professional and courteous.

I must also say, their food is superb! Cost to value is impeccable. From their breakfast buffet (no joke, tasted the best ripe mangoes here!) to their order-in selections! Like we were surprised how good they were because hotel/resort food aren't always as good. But we love their Nasi Goreng, Chicken Sate and Kinilaw!! Here we realized they really make sure you have the whole package homy stay!

We also booked in Atmosphere Spa & Resorts between 2/24 - 2/26.
My husband and I are 101% sure we want to be back at Vida Homes on our next visit to Dumaguete! So you know how much Vida Homes had made our stay wonderful!

One thing that I can just recommend is if they can incorporate complimentary airport transfers in their accommodation packages.

Hi! We are pleased to know that we made your anniversary holiday wonderful. Thank your for your feedback on our food, property and staff. We will be sharing your review to the entire team so everyone would know how much you appreciated our team. We would be happy to welcome you once again. We wish you all the best!

Report response as inappropriateThank you. We appreciate your input.
This response is the subjective opinion of the management representative and not of TripAdvisor LLC
N6467NLandrewm
Royal Oak, Michigan, USA
75
Reviewed February 10, 2020
Nice resort, but small misses added up

Overall we enjoyed our stay here, but there were a number of small misses that added up.

First a few of the positives:
- The resort grounds and rooms look as nice as the pictures suggest. Well kept, clean, and serene.
- Staff was very nice and helpful.
- The food for the most part was pretty good. Tip for breakfast: there's a buffet, but you can also order a few local favorites to order like longanisa and tapa.
- The pools have nice areas for kids. We had a 3 and 1 year old with us and there are nice wading areas where even the baby could sit and play.
- The resort was very quiet. We didn't do any diving and just relaxed by the pools and beach, so a lot of times we were by ourselves, or there were just 1-2 other families/couples around. (Some of this might have had to do with less travelers because of coronavirus)

Cons:
- Upon checking in, we were told our room didn't have an intercom. Their suggestion was to find someone on the grounds to let them know if we needed something like room service. We ended up calling the front desk from our mobile when we needed something, but this was a strange inconvenience, especially when we ordered room service every night. You'd think adding a phone to the room would be easy.
- We got the 2 bedroom beach view penthouse. The room itself was very nice and clean with great views, but for the price, it was missing a number of things. For example, it had a dishwasher, but no detergent and no towels to dry dishes. Some of the electronics were not fully setup (TV mount on wall but not hung, a bunch of Sonos speakers throughout the condo not set up, ceiling lights flickering when off in one of the bedrooms). A half bath was locked up and we were told that it was only unlocked if we had an extra bed in the room. Those are a few examples, but there were a lot of little things that added up. I was expecting more given the price. And with some of the construction happening, I got the feeling that they were in expansion mode without paying attention and finishing the details in existing rooms.
- Beach area by Vida Homes isn't so great - the area at Pura Vida near the restaurant was better. Don't expect to sit on the beach by the condos. And from our lanai, there was a bit of an eyesore on the beach with a bunch of white bags just lying around.
- There was an issue with the infinity pool filter. We only had two full days at the resort and the pool was going to be closed those days. Luckily it ended up being down only 1 day, but that put a damper on our vacation since it had the best areas for our kids and was a selling point for us since it was right by our room. And while there are other pools on the resort grounds, it was inconvenient because there aren't bathrooms or anything near the pools, so you have to go back to your room.

I feel like this could easily have been a 5 star rating if they addressed some of the shortcomings with the rooms. It looks luxury at first glance, but doesn't feel so with some of the missing details in the rooms.

Thank you for taking time to write a detailed feedback. We are glad you enjoyed your stay with us. We sincerely appreciate your good comments on Vida Homes property, food and service. It is unfortunate that you were here when our swimming pool filter broke, it is an unexpected event, we did our best to fix it the soonest possible time.

We heed to our guest's feedback and the management already looked into all your comments to address the small misses. We hope to welcome you back in the near future.

Report response as inappropriateThank you. We appreciate your input.
This response is the subjective opinion of the management representative and not of TripAdvisor LLC
ingridrachel
Ruthin, United Kingdom
3
Reviewed January 30, 2020
Absolutely perfect as always

Vida homes offers unrivaled hospitality, cleanliness and comfort in an idyllic setting. This has been my fourth trip here and I’m pleased to confirm it is as wonderful as ever. The staff group remains consistent which I believe is a reflection of the quality of everyone’s experience here. The attention to detail and genuine friendliness of everyone is a constant. Accommodation is spotless and luxurious. Dive site next door offers the same high standard. Such a treat.

Thank you for your feedback. We are overjoyed to know you had a wonderful time in your 2-3-week holiday every year (fourth time this year). It is our pleasure to host your holiday and we are always putting our best foot forward to provide a genuine and warm Filipino hospitality. It is a joy to have you, Paul and Alex here. We are looking forward to welcoming you to your home in paradise in a year or two:) Cheers and hugs from your Vida Homes family!

Report response as inappropriateThank you. We appreciate your input.
This response is the subjective opinion of the management representative and not of TripAdvisor LLC
acledic
Asnieres-sur-Oise
102
Reviewed January 16, 2020
Wonderful time in Dauin !

Many thanks to you and your family for staying with us. We are sincerely grateful for the wonderful review re our property --- accommodation, food, location, staff and diving. We enjoyed serving you all. We are looking forward to your next holiday in Dauin; just keep us posted :)