US$105
US$55
View deal
SAVE US$50
Booking.com
eDreams
Trip.comUS$105
View all 15 deals
Prices are the average nightly price provided by our partners and may not include all taxes and fees. Taxes and fees that are shown are estimates only. Please see our partners for more details.
V233JSsusanh
Newbury, United Kingdom
4540

We were part of a group of 28 people and were very happy with the week we spent at the hotel. The third floor room with balcony overlooking the sea and river was very comfortable and clean with a safe as well. The dining room was large and airy and we thoroughly enjoyed the food and free wine every evening. The staff were amazing and worked very hard. The beach at the hotel when the tide went out was challenging, you would need a walking pole to help you across the river if you are at all unsteady!! Position of hotel unbeatable, we would go back definitely,

Trip type: Travelled as a couple
See all 316 reviews
Nearby Hotels Expedia.com
View deal
eDreams
Booking.com
US$55
travelup.com
View all 11 deals from US$55
311 reviews
0.4 km from Hotel Olimpo
We compared the lowest prices from 11 websites 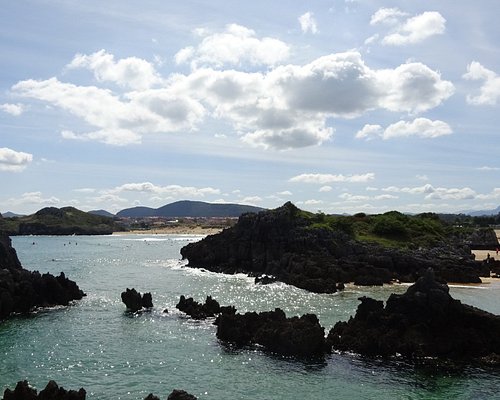 Expedia.com
View deal
Hotels.com
FindHotel
US$61
ZenHotels.com
US$72
View all 16 deals from US$61
201 reviews
0.6 km from Hotel Olimpo
We compared the lowest prices from 16 websites

Great location. Our room was clean, also a second room with another balcony which was very large, however despite having two balconies the only views we had were of the car park and a field. The bar and staff were ok. The restaurant and staff had a lot to be desired. We were on a table with eight on and we really bonded and the final night was supposed to be a special candlelit meal. Imagine our horror when our group was split up on the final night to make way for another group, they had quicker service and to make things worse, they had food from our salad table leaving us with some foods missing. for whatever reason this other group had been put in front of us............ lousy end to the holiday. The food was very poor, not much selection..... hardly any veg or potatoes of any kind. Two choices of main, but nothing for our vegetarian friend, despite the hotel knowing. Breakfast, continental or full english. I would recommend the continental at least that was meant to be cold. the bacon and eggs were cold. The coffee machines did not always work, when they did work they gave out the wrong drinks. BEWARE the stairs and steps, the stairs were not lit (there was not a light there) and the steps to/from the restaurant were dangerous, we know of at least five people who took a tumble on these steps, I actually lost my footing coming down the stairs and crashed into a wall. PLEASE USE THE LIFTS.
I certainly would not return to this hotel nor would I recommend it to others

Room tip: We were on the first floor overlooking the car park, so away from the noise of weddings etc.
Ask Iaon1967 about Hotel Olimpo
Thank Iaon1967

This review is the subjective opinion of a TripAdvisor member and not of TripAdvisor LLC
Anthony B
Norfolk, United Kingdom
2426
Reviewed June 22, 2019
Lovely Hotel

We stayed here with Newmarket holidays for one week. The room was comfortable but a little tired. We could not fault the food in the restaurant either breakfast or dinner, good quality and plentiful. Prices in the bar were very reasonable for a hotel. We really enjoyed our stay.

Room tip: We had room 305 looking out over the pool and beach, with a large balcony.
Ask Anthony B about Hotel Olimpo
1  Thank Anthony B

This review is the subjective opinion of a TripAdvisor member and not of TripAdvisor LLC
Journey37239
Plymouth, England
322
Reviewed December 15, 2018
Excellent location,nice rooms,good food

In need of serious renovation.
One of our group left over 100Euros in their room,the hotel found it and have been promising to send it since May. Now December and nothing has arrived! Very poor and the Tourist Board did not help.

This review is the subjective opinion of a TripAdvisor member and not of TripAdvisor LLC
Leonard B
12
Reviewed October 12, 2018
Very disappointed

Mmm a quality 4 star hotel, I think not. Very tired - trip hazard down the magnificent staircase due to frayed carpet and loose stair rods. Nice room layout, but problems with shower holder (coming out of wall), radio - not working and loose in bed head, wardrobe door a bit loose. Late night dining unfortunately not to our taste, together with exactly the same salad ingredients for starter every night. Rock hard bread! Degree in further engineering required to operate the coffee machine. Nice location.

On the positive side, other aspects of menu quite acceptible. Came back every day to a a beautifully made up room.

This review is the subjective opinion of a TripAdvisor member and not of TripAdvisor LLC
Richard C
Bourne, United Kingdom
86
Reviewed October 10, 2018
"FAWLTY TOWERS" SPANISH STYLE!!!!!!!

Well where do you start ,Hotel tired out says its a 4 star. More like a 2 star from thread bare stair carpets to fawlty hair drier safe not working and after three attempts by the maintenance man still no result. and left it. inoperative Breakfast cold fried eggs and cold bacon , mud for coffee ,and one morning coffee machine not working. I could go on ,but have stayed in a lot of hotels and found this one pretty appalling, and would not go near this hotel again or recommend it to anyone. we were part of a 49 person coach party of which they are incapable of coping with in a professional way.

This review is the subjective opinion of a TripAdvisor member and not of TripAdvisor LLC
View more reviews
PreviousNext
12…53
<script type='text/javascript' crossorigin='anonymous' async onerror='__scriptLoadError(this,tru