US$192
US$173
View deal
FindHotelUS$192
TravelocityUS$192
CheapTicketsUS$192
View all 13 deals
Prices are the average nightly price provided by our partners and may not include all taxes and fees. Taxes and fees that are shown are estimates only. Please see our partners for more details.
rbw427
1

Traveling for business can be hectic and stressful. Being greeted when coming or going, made me feel like I was at home. A simple, "Good morning!... See you later and have fun today... Hey! How was your day?..." made me feel like I was at home. Thank you, Bonnie, for your hospitality and kindness! I felt like I was being welcomed home each time I walked back into the hotel.
Another shout out to Spencer! Thank you for helping me find ski pants, when I left mine at home!
You guys have a great crew here and I will definitely come back!

Trip type: Travelled on business
See all 180 reviews
Nearby Hotels 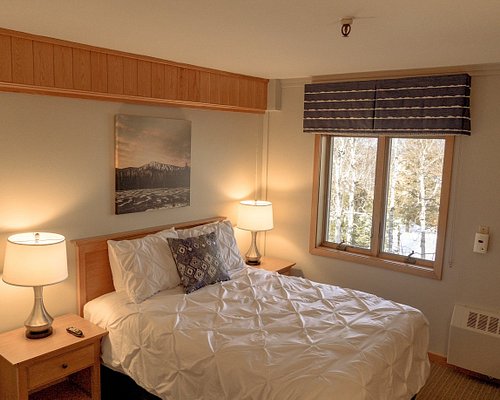 Breakfast included
Sugarloaf Inn
US$125
Booking.com
View deal
Reserve now, pay at stay
Expedia.com
US$125
Priceline
US$125
Hotels.com
US$125
View all 13 deals from US$125
82 reviews
0.3 km from Sugarloaf Mountain Hotel
We compared the lowest prices from 13 websites Expedia.com
View deal
Pay up to 12X
Hotels.com
US$79
FindHotel
US$79
Travelocity
US$79
View all 12 deals from US$79
250 reviews
16.1 km from Sugarloaf Mountain Hotel
We compared the lowest prices from 12 websites The staff at the sugarloaf mountain resort was gracious and accommodating, and made our trip great. Arya in particular made it very easy for us to get settled. Thank you all so much for working so hard over Christmas!

This review is the subjective opinion of a TripAdvisor member and not of TripAdvisor LLC
flowerpotmen92
Maine
1512
Reviewed October 16, 2019
Autumn in the Mtns of Maine

Don’t miss the amazon foliage in autumn in the Mtns of Maine. Just be prepared for lots of driving! Bring some good books and bottles of wine! As opposed to VT Maine MTns aren’t close to much so having to drive to “get there from here” is a necessity!

Review collected in partnership with RCI
This business uses tools provided by Tripadvisor (or one of its official Review Collection Partners) to encourage and collect guest reviews, including this one.
Ask flowerpotmen92 about Sugarloaf Mountain Hotel
Thank flowerpotmen92

This review is the subjective opinion of a TripAdvisor member and not of TripAdvisor LLC
Usuallyontheboat
41
Reviewed October 9, 2019
Late night stop while travelling

Wonderfully clean welcoming accommodations. Hotel is flawless coupled with excellent customer service from the front desk. Views are fantastic from every corner. We stopped late traveling one night and the views we met in the morning were breath taking. Next time we will stay longer so we can explore the area a bit more.

This review is the subjective opinion of a TripAdvisor member and not of TripAdvisor LLC
drtjl
1
Reviewed September 16, 2019
par excellence!

Everyone and everything was outstanding the entire week!
Even the weather cooperated for the most part!
Have been there before and plan to return once again.
Would love to have the family join us there for a reunion.

Review collected in partnership with RCI
This business uses tools provided by Tripadvisor (or one of its official Review Collection Partners) to encourage and collect guest reviews, including this one.
Ask drtjl about Sugarloaf Mountain Hotel
Thank drtjl

This review is the subjective opinion of a TripAdvisor member and not of TripAdvisor LLC
Momsaidtravel
Jacksonville, Florida
5857
Reviewed August 1, 2019 via mobile
Summer Mountain Getaway

We stayed at the Sugarloaf Mountain Hotel as an RCI exchange. It was a hotel with a wet bar and fridge as the “kitchen“. A little disappointed that we didn’t have a stove or oven, the staff of Emma and Christin immediately had both brought up to our room. This is probably the friendliest group of hotel staff in every realm of the hotel that I have come in touch with a long time. As an example, one morning I missed out on getting cinnamon bun in the 45 restaurant, and the hostess later that morning actually discovered a couple that were not out and save them for me. The activity department, where you could sign up for different excursions,was also fantastic. I would definitely stay here again when I’m up this way. And if I were a skier, this would be an awesome place to ski.