The Spa Hotel
Contact accommodation for availability.
There are similar hotels available.
View all
B2200WDsusang
4016

Review of The Spa Hotel
Reviewed October 31, 2020 via mobile

Visited to use a afternoon tea voucher I had been give. As iim gluten free eating out is always an adventure. On arrival staff where happy and helpful. Family ordered soup and ham sandwiches and drinks. Which duly arrived all was delicious best ham sandwich my son has ever had. White bread and butter pudding was a bit of a let down but think that was to his personal taste not the dish itself. Husband asked for a toasted cheese scone which they went out of their way to do. Delicious.Mine unfortunately was shop bought cakes very cold sandwiches (lovely fillings) one with pickle( gf I'm hoping). Fantastic scone. Over all fantastic service. Thank you Stev who was run off his feet. We'll be back but not for afternoon tea. More

Hotels.com
View deal
Free cancellation
Pay up to 12X
Booking.com
US$205
FindHotel
US$180
Priceline
US$204
View all 13 deals from US$179
470 reviews
0.3 km from The Spa Hotel
We compared the lowest prices from 13 websites

Top Rated
Breakfast included
OYO Cliffemount Hotel
US$47
Booking.com
View deal
Hotels.com
US$46
ZenHotels.com
US$38
FindHotel
US$44
View all 13 deals from US$38
674 reviews
15.1 km from The Spa Hotel
We compared the lowest prices from 13 websites 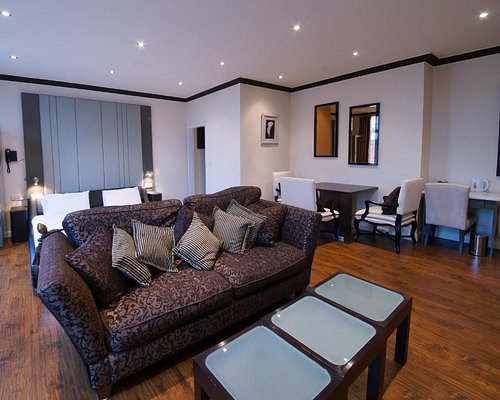 PremierInn.com
View deal
Trip.com
US$76
Agoda.com
ZenHotels.com
View all 6 deals from US$34
919 reviews
16.6 km from The Spa Hotel

We have just returned from an amazing stay at the hotel. Right from the minute we entered we felt welcome and safe. The staff all knew exactly what they were doing and the processes were well thought out and simple to follow. Visitors were shown individually to their rooms so everything was clear. The room was immaculately clean, with hand sanitizers everywhere. We ate dinner and breakfast at the hotel and again, we ordered from the table using QR code but there was still some interaction with staff so it felt cosy and welcoming but very safe. A lot of tables have been moved so there's loads of space (probably a lot more than they have to have). They clearly care about the visitors and the staff and have got the balance between customer service and safety spot on . We had a brilliant time and will be back as soon as we can. Well done to you all and thank you.

This review is the subjective opinion of a TripAdvisor member and not of TripAdvisor LLC
AdamRyder
Leeds, United Kingdom
4045
Reviewed October 26, 2020 via mobile
Possibly the most unsafe business in the UK

We arrived at The Spa Hotel and were shown to our room. On arrival to the room it was perfectly clear that this room had not been cleaned or attended to from the departure of the previous guests.

The bed had clearly been slept in, rubbish was in the bin, cups had been used and were incredibly dirty.

Thankfully they offered a full refund and we left within 5 minutes of being shown to the room.

A full report will be given to the HSE.

What a cruel review!! I am trying to choose my words carefully as review sites have this wonderful system whereby guests can say what they want but owners have to mind their P's and Q's. But are you literally insane? This was a simple miscommunication between housekeeping and reception about which rooms had been cleaned. We weren't expecting you to stay in a room that hadn't been cleaned. We are a hotel for god's sake never mind a hotel working through a pandemic. The mistake was picked up on immediately by the receptionist and you were taken back to reception to wait for the room to be cleaned. You chose not to wait. It's hard enough running a hotel during these times without having to deal with this kind of utter nonsense.

Report response as inappropriateThank you. We appreciate your input.
This response is the subjective opinion of the management representative and not of TripAdvisor LLC
Ceri_Pearce
Newcastle upon Tyne, United Kingdom
6830
Reviewed October 26, 2020
Lovely hotel on the cliffside

We arrived here Friday afternoon in the pouring rain and werent able to check in for an hour so I went in and ordered hot chocolates while we waited in the car. 10/15 mins later Dawn came out to tell us our room was ready.
The hotel has a one way system so people dont pass each other in the corridors, and it works, until people (a few over the weekend) didn't abide by those rules and so I chose not to either a couple of times. We stayed in room 10 which was lovely. It smelt amazing on arrival which we can only assume had been sprayed with a room spray. It was a nice touch.

Friday night, rather than sit in the restaurant with our 2 dalmatians, we decided to go out and get a takeaway. Which, ideally, they're all located down the same 2 streets only a 6-10 min walk from the hotel.

We slept fantastic although we were concerned that the amount of banging and clattering coming from the surrounding rooms was making our dogs bark.

Breakfast next morning was plentiful, we took advantage of the B&B aspect. Soy & Oat milk was no issue so we were happily satisfied with cereal. Our cooked options though, were a bit hit and miss. I had eggs benedict with smoked salmon and spinach. The eggs were overcooked and the spinach hadn't been washed so it was gritty. Not a great start. The fruit pot was small and lacklustre, so we fed it to our dogs.

Saturday night we had to go to reception a couple of times as there was a brand new car parked outside our patio doors, so close that if we opened it, it would hit the bonnet. Luckily, we were careful, we had asked reception to find out who the car belonged to so they could move it, needless to say, Sunday morning when we were due to check out, it still hadn't been moved. Turns out they were two doors down from us.

Sunday morning's breakfast was still a bit hit and miss, again I had eggs benedict with smoked salmon. The eggs were both undercooked and overcooked, the hollandaise sauce was stone cold and the muffins were like bricks. Not a great end to a nice weekend.

Checkout was simple all I had to do was leave our patio door keys and key card at reception. I even spoke to the General Manager who had heard about our varying concerns, now all they have to do is try and put them into practice.

Our first, and most important suggestion was that they put fridges in the dog friendly rooms. It's all well and good being 'dog friendly' but other than the 'doggy menu' in the restaurant serving pawsecco, doggy popcorn and the like, they dont actually CATER for dogs. Having fridges in the rooms would enable RAW dog food to be kept cold. (we had this issue from the get go as they are both raw fed and the food went off very quickly because the room and bathroom were warm).

Also for a hotel with 26 rooms, a function room AND spa...the thing they lack is a decent sized car park. For 26 rooms they have about 16 parking spaces, what they should do is allocate room numbers to the car parking spaces at the back so each dog friendly room has their car parked outside the exact patio door.

The hotel overall was comfy, clean-ish, maybe a tad too warm and they certainly don't scrimp on breakfast but the only way we would stay again is if our dogs were able to be catered for the same as the guests.

Also, the guest book missing in our room would've allowed us to find suggestions for places to eat, drink, take the dogs for walks (besides the obvious beach).

This review is the subjective opinion of a TripAdvisor member and not of TripAdvisor LLC
j0h59
London, United Kingdom
1224
Reviewed October 25, 2020
A lovely break

This hotel is a real gem. We had a lovely break. The rooms have recently been refurbished I believe and our room (5) was very large and beautifully decorated. The staff are very friendly and helpful. The hotel is walking distance to the beach which was amazing. Very covid secure and clean.

This review is the subjective opinion of a TripAdvisor member and not of TripAdvisor LLC
eesharules
Greater Manchester, United Kingdom
32
Reviewed October 24, 2020 via mobile
Lovely family holiday

We stayed here on a short family holiday. The staff are wonderful. Team bubble and espically Stephen looked after our every need. Would recommend if you like long walks and have a dog!
The food is is fantastic! The parma was devoured and the oreao cheesecake hit the spot!