Expedia.com
Travelocity
Snaptravel
View all 8 deals
Prices are the average nightly price provided by our partners and may not include all taxes and fees. Taxes and fees that are shown are estimates only. Please see our partners for more details.
Kaveh A
Washington DC, District of Columbia
98

My girlfriend and I enjoyed our stay here. The staff was friendly and the food was good. The location is a bit outside of Port-Salut, but if you have a vehicle it's not a problem; maybe an extra 10 minute drive. The grounds are nice: good view of the ocean and right on the water.

The downside is that there were lots of mosquitoes during our stay. My girlfriend is very sensitive to mosquito bites, so we spent 20 minutes at night killing mosquitoes before going to bed. The hotel owner should think about how to fix this problem. Also, there was Wi-Fi, but we never could get it to work for us (over two days).More 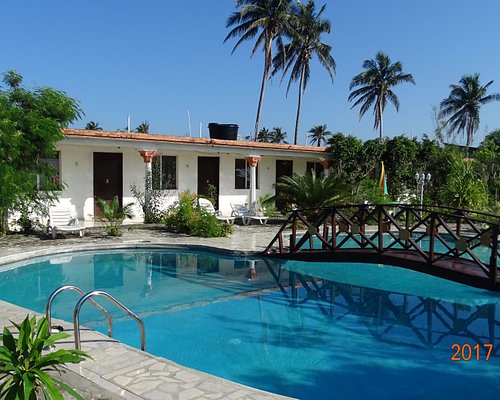 When I was shown the "family cabin" I was put aghast. Not only was the cabin small, but it was mosquito ridden and starchy. The extra money we paid for the "Ocean view" was wasted for there was no view. The
photos online obviously mislead us. Some of the rooms were located in the parking lot. I was shocked to see the pool filled with brown water. When rain came, it wasn't even covered.
Our food never ceased to come late. You had to bribe the chef to cook if he didn't have it in him. The small staff had to manage everything. Thought they worked hard, there weren't enough members to keep the hotel in good shape. I was appalled to see staff and bar tender taking the water that was designated for the paying guests. Nothing on the menu could be ordered because the hotel was out of almost everything. I recommend this hotel for couples and hard-core travelers, but NOT for families.

This review is the subjective opinion of a TripAdvisor member and not of TripAdvisor LLC
CathyaJ_12
East Windsor, New Jersey
136
Reviewed July 15, 2015
Peaceful Hotel

This was a simple place not much in the room but the service was impeccable. Our hosts were Berline and Yanick. They went above and beyond to accomodate us. We checked in late at 8pm and they still opened the bar/resto and cooked for us. My husband had the grilled shrimp which came with plantains and salad. It was amazing. My children and I had spaghetti and they loved it. In the morning we had 2 choice of breakfast. So we chose polenta (a Haiti special) and the omelettes. It was again great. The rooms were small but the customer service made up for it.

This review is the subjective opinion of a TripAdvisor member and not of TripAdvisor LLC
Carla C
North Brunswick, New Jersey
3
Reviewed May 23, 2015
Enchanted discovery

Great location, stunning view of the coast line, beautiful rooms, perfect for a romantic get away. Well maintained and beautiful grounds enlighted with sculpture and tropical fowers and plants. It is a charming property and the staff is welcoming and friendly. I would return anytime.

This review is the subjective opinion of a TripAdvisor member and not of TripAdvisor LLC
Segowdh
Kabul, Afghanistan
418
Reviewed March 5, 2015
The owner/Manager sabotages his own place!

We booked 2 rooms for 3 nights over the Carnival period in Feb 2015.
One room with ocean view, another with sea view.
We got there and the 1st room was what we asked for. Sea view albeit definitely NOT Panoramic (as promised online).
The 2nd room (ocean view) had no view whatsoever, no TV basically, it was not what we asked for.
The staff was at loss of what to do. They called the 'manager/owner' on the phone who was useless.
Eventually, we were given a 'Panoramic sea view" but after a lot of arguments and we were promised a discount.

Both rooms (actually the whole place) were to come with free wifi *upon availability.
There is NO wifi whatsoever in the entire complex. Even the front desk does not have access to wifi (I asked) - which means that this wifi thing is a marketing lie. You show up and because there is the disclaimer of 'upon availability, they are free to say, that this week, wifi has issue.
However, that there are no devices installed anywhere in the entire place shows that wifi was never to be installed and that it is not a 'temporary' issue.

The restaurant was terrible. Basically, 2/3 of the items written on the menu were unavailable. We are talking about juices (basics) and all the desert. I can understand that some fruits are not of season, but what about ice cream.??!?!
We also stayed during a tourism pic, not off season. I can't believe that the so-called Manager let his staff to fend for themselves with upset clients with so little resources and no better planning.

The staff was actually very nice and tried their best. But again, the manager/owner either sabotages the whole operation on purpose or does not care about his business.
The hotel was understaffed and i saw the same 3 main staff (reception, restaurant) work their butt off for the 3 days and half we were there. From 6 am until 10pm. Unbelievable.

Finally, when we checked out, I was surprised to see the following issues on our bill:
- the 2 rooms were rated at $80 each a night (without taxes) - the highest rate, while we had booked a room (sea view) at $70 and the ocean sea view (we didnt get) at $80.
I complained and we eventually got the 2 rooms at $70 each (the rightful price for the 2 rooms we ended up with - NO discount)

- the price of the dishes eaten at the restaurant did not match the prices on the menu (they were higher of course). Not by much, but this is completely illegal.
The reason given by the staff was that some menus were out of date!!

Again, le sieur Mr. RB should look after his place because this is unacceptable on so many levels.

Overall, the fact that this place is dysfunctional takes over on the beauty of the location, the relative cleanness of the place and the hard work the staff provides to please its customers in spite of the obvious sabotage from the owner/manager.

Room tip: no good tip. I carefully chose the rooms I wanted online (upon description) and i never got what i asked for. If you do book a room there, print your receipt with the room description so that you can show it to the staff upon checking and verify that you are given what you asked for (remember the front desk does not have internet)
Ask Segowdh about La Source Hotel & Resort
2  Thank Segowdh