Topics include Things to Do, Dining Scene & more!

The official currency of Jamaica is the Jamaican dollar (JMD). Prices at most hotels/resorts (spa, gift shop, tour desk, etc.) and shops frequented by travelers are often expressed is United States dollars (USD). Some shops frequented mainly by Jamaicans set prices in Jamaican dollars and will NOT accept any foreign currency (some will NOT accept USD).

Retail exchange rates for smaller amounts vary among payment systems, countries, banks, and other places where you might exchange money. For the smaller amounts exchanged in a retail setting, banks, credit cards, and exchange agencies charge commissions to convert currencies. These retail rates add commissions of 1 to 10 percent or more. For example:

It is rare to have any problems paying for anything in US dollars at hotels and larger shops in tourist areas, and any business has a calculator handy to do the conversion (if required). Any change due back to you must legally be given in Jamaican currency. While you can ask for your change in US dollars in some cases this will not be possible. If you are paying in US dollars it is best to pay as close to the exact amount as possible. It is best to use $US1 and $US5 bills if at all possible. Don't expect US coins back as change.

At times a vendor can make a "mistake" doing the mental conversion calculation whether by accident or intentional. If it's important to you, do not feel taken advantage of, always do the math yourself, state the US dollar price, and gently insist when you are correct. Tipping should be optional and at the purchasers discretion.

Cash Cash and other negotiable instruments in amounts greater than $US10,000 brought into or out of the country must be declared to a Jamaican Customs officer when you enter or leave the country. Use the red line in the customs hall to speak with a customs officer.

Smaller shops, craft markets, and street vendors in Jamaica mainly or exclusively accept cash in payment. At most tourist shops, etc. the most usable forms of cash are the $US1 billl and the $US5 bill. These two forms of cash are also usable for tips at bars, hotels, etc.  Hotels, resorts, and larger shops will also accept other forms of payment (including local and international debit and credit cards).

Foreign coins such as US silver dollars and Canadian loonies and toonies are not usable in Jamaica. Use foreign banknotes (aka paper money, aka bills, aka cash) only.

Be aware of your financial institutions fee structure for foreign and foreign denominated transactions for debit and credit card purchases of goods and services. Call your bank or other card issuer if you have any questions.

Bank Gift Cards Bank gift cards with the Visa or MasterCard logo are treated the same as a debit card when making a purchase. See above. Bank gift cards do not normally work at an ATM machine.

ATM Machines There are ATM's (aka ABM, aka cash machine, aka cashpoint, aka cashline, aka hole in the wall) located at the branch offices of most Jamaican banks. Be aware of your surroundings and try to avoid out of the way ATM's at night - just as you would at home. Many bank ATM's require you to insert your card to open the door to the ATM room - assuring your privacy and security during your transaction. There is a US dollar ATM machine in the departure terminal at the Montego Bay airport. Some bank ATM's will dispense only Jamaican dollars and others will allow you to choose the desired currency (Jamaican dollars or US dollars) to be dispensed.

Some of the largest banks in Jamaica are National Commercial Bank, RBTT, and Scotiabank. All have offices and ATM machines in most larger towns and cities on the island. ATM machines are located both in branches of the banks and in off-site locations (resorts, shopping centers, craft markets, food stores, gas stations, etc.). For a list of branch locations and ATM machine locations in Jamaica see the following:

Note: Scotiabank cards issued in Canada should work in ATM machines owned and operated by Scotiabank Jamaica and there should be no charge.

Non-bank ATM machines are also available at some major hotels, shopping centers, and attractions in the popular tourist areas. Cool Cash, a Jamaican corporation owned by Joey Issa, is the major non-bank ATM operator in Jamaica. The company provides tourists access to US currency via its ATM's.

Be aware of your financial institutions fee structure for foreign and foreign denominated withdrawals. These may be different than the fees for the purchase of goods and services. Call your bank or other card issuer if you have any questions. The local (Jamaican) bank may also charge an additional fee for any ATM transaction. Non-bank ATM operators in Jamaica always charge a fee for any ATM transaction. Most ATM machines in Jamaica have a $US6.00 service charge. However, some bank owned ATM machines are part of international networks that allow customers of one bank to use another banks ATM machines at lower cost or at no cost. Contact your bank to see which, if any, network you can use with lower or no charge.

ATM machines are not as common in Jamaica as in many other parts of the world. They also are out of service more frequently than you might expect, but typically when cash being serviced e.g. to replenish cash and this is usually at a set time each day. It is rare for an ATM to be out of service for days, but a few to 24 hours is the average wait time for service restoration.. Travelers have also noted that ATM machines in some locations often run out of money on a regular basis. Do not depend on ATM machines as your sole source of money while you are in Jamaica. This is especially true for travelers who are not staying at all inclusive resorts. It is best to bring a mixture of forms of money including some cash and some travelers checks. Do not depend on the availability of ATM machines and the acceptance of credit/debit cards by merchants. Many smaller merchants accept cash only.

Banks Bank branches are found in most larger towns on the island. Some of the largest banks in Jamaica are National Commercial Bank, RBTT, and Scotiabank. Normal bank hours are 8:30 AM to 2:30 PM Monday to Friday. Hours differ slightly by the day of the week and by the branch. Banks in Jamaica are not normally open on Saturday (a few, very few, branches are open on Sat.), Sunday, or public holidays. For a list of branch locations and their opening hours see the following:

Commercial Banks and some credit unions, buidling societies will convert US dollars, Canadian dollars, British pounds, Euros, and a select number of other highly convertible currencies into Jamaican dollars.

Cambio In most cases the best currency conversion rate will be available at a cambio, not at a bank, hotel, or shop. You can find many cambio locations in all major tourist areas in Jamaica. You can convert  US dollars, Canadian dollars, British pounds, and Euros into Jamaican dollars at almost any cambio. Other currencies may or may not be accepted by a given cambio. 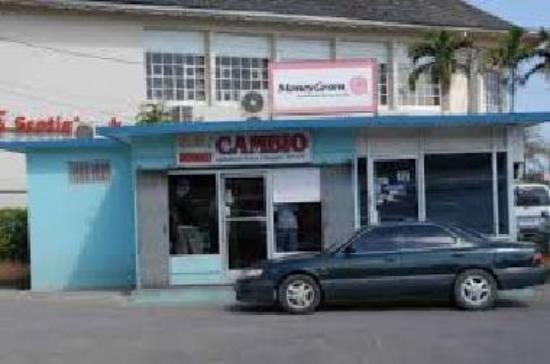 Street Conversion of currency on the street is not recommended.

On your departure from Jamaica you can exchange your Jamaican dollars into US dollars at the airport in Montego Bay or Kingston. Conversion back into other currencies such as British pounds, Euros, or Canadian dollars may, or may not, also be possible at the airports on departure.

Change In almost all cases hotels, restaurants, shops, etc. will give change in Jamaican dollars. Because of this, if one is paying for goods and services in a foreign currency one should use the smallest bill possible. Most visitors attempt to use $US1 and $US5 if at all possible.

While in Jamaica most hotels, restaurants, shops, etc. will have a difficult time 'breaking' a large US bill, for example a $US20 bill, into smaller US dollar bills. Most visitors attempt to use $US1 and $US5 if at all possible. If you wish to 'break' a large US dollar bill into smaller bills it may be possible at a bank.

Banks etc. outside Jamaica Banks and other currency exchange facilities, for example your home bank or exchange facilities at the airport in your home country, located outside Jamaica normally offer very poor exchange rates. If at all possible wait until arrival in Jamaica to exchange any money if you normally use US dollars, British pounds, Euros, or Canadian dollars. If Jamaican dollars are required at the moment of arrival in Jamaica, consider exchanging a limited amount of money at the airport in Jamaica (see above). The amount you exchange at the airport should be sufficient to covert tips, taxi, an other minor expenses you may have during the first day or so. Otherwise, consider the use any of the other exchange options available in Jamaica listed above once you arrive.

On a specific date the following exchange rates were found for the conversion of $US1 into Jamaican Dollars:

Notes: 1) The 'official' exchange rate is for the exchange of millions of US dollars between banks and foreign currency traders only. 2) The exchange rates change every day and the values listed above applied only on one day. The rate you receive will be different than those listed above. 3) Each bank, cambio, hotel, etc. offers its own exchange rate. Thus, for example, two cambios on the same day may offer different exchange rates. 4) The values shown above are intended only to give an example of the difference between exchange rates at various locations.

For current rates and guides to rates, please check the Jamaican central bank (Bank of Jamaica) website at http://boj.org.jm/

Highy recommended that for a guide to current converson rates you check the Jamaican central bank (Bank of Jamaica) website at http://boj.org.jm/.